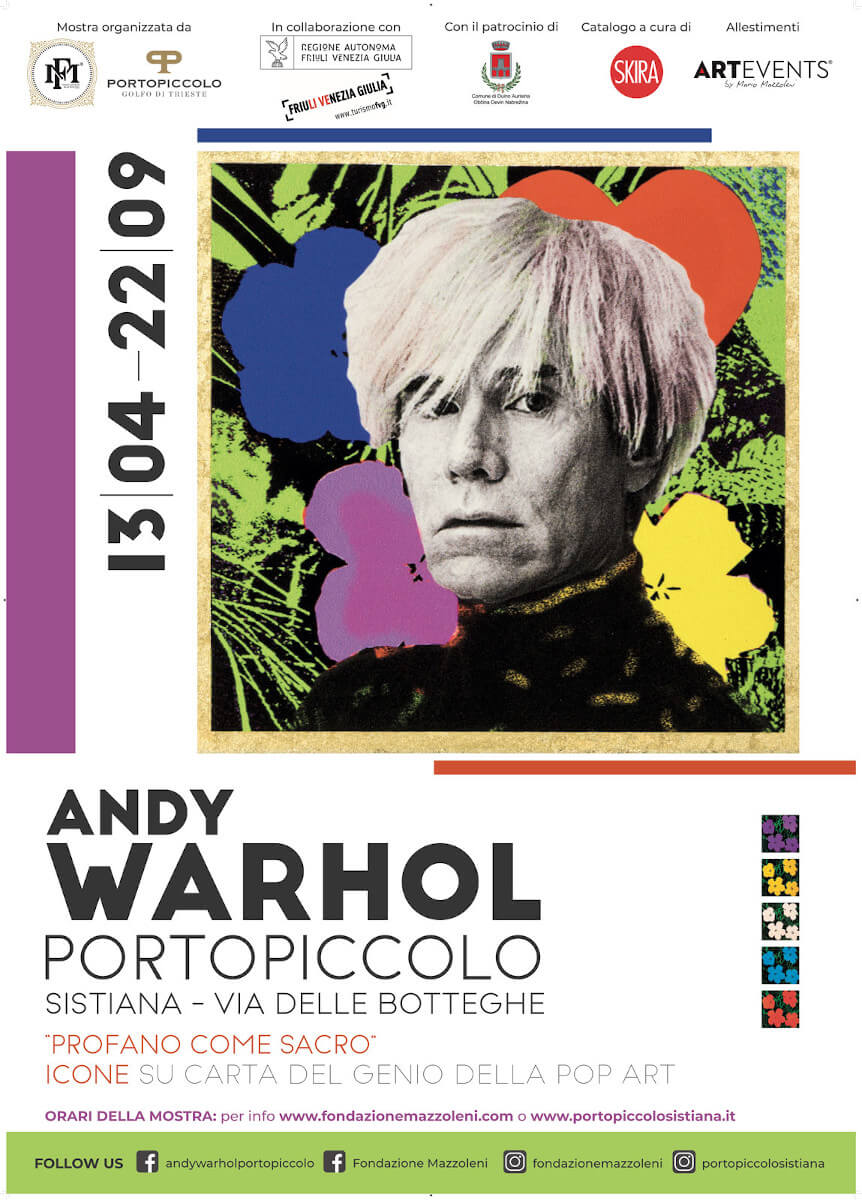 On April 13, 2019 in Portopiccolo, in the splendid setting of the Gulf of Trieste, inaugurates an exhibition entirely dedicated to one of the most important and revolutionary artists of the twentieth century: Andy Warhol. The genius of Pop Art colors the coast of Friuli Venezia Giulia through a suggestive and exciting exhibition with 57 artworks who tell his artistic and personal events, offering a complete overview on chameleonic and multifaceted personality of the American master.

The exhibition LOFT, located between the alleys of Portopiccolo, welcomes the familiar faces of the icons of the sixties as the famous Marilyn Monroe and Isabelle Adjani, the relics of the history of American rock as Mick Jagger and the desecrating icons of consumerism of those years as the complete series of Campbell’s Soup. Andy Warhol has upset thecanonical concept of art thatwas in force until then andbrought the products of popular consumerism into galleries and museums.

His PopArt is a popular and democratic art, an art at the serviceof the people and of the massification, an art that mustbe “consumed”just like anyother commercial product.Symbol of this revolutionarytheory, in the exhibition, thecomplete series of 10 Campbell’s Soup signed in theoriginal, an example of howa mere product of mass consumption has become a universally recognized symbol of pop art. The reproduction of images produced by the media is at the basis of Warhol’s aesthetic interest, a constant interest that oscillates between the desire for glorification and the desire for the demystification of the proposed subject.

Through the use of the serigraphic tool, Warhol transforms the faces of those years into icons, tinging them with bright colors and daring combinations: Marilyn Monroe,Mao Tse Tung, Mick Jagger are just some of the most representative faces of the Warhol phenomenon. His unstoppable artistic talent has spared no scope, from cinema to politics, from publishing to discography, from the world of celebrities to social denunciation.

In Warhol coexist avantgarde and tradition, behind his famous artworks that have made history, there is an inverse of a thousand facets: exuberant, provocative, ridiculous and irreverent genius as fragile, devoted and introverted, a contemporary Gianowith his double face managed to look at the same time in two opposite directions: public life in the name of provocation and unruliness, and the intimate and private, out of the spotlight and reserved for a few. Warhol so simple and so complex, unstoppable artistic personality, revolutionary and eternal artist.

A complete exhibition path, therefore, which offers the visitor the opportunity to observe the thousand faces of Andy Warhol, to grasp the deepest meanings of his artistic production and which allows you to admire the masterpieces that have made the history of American Pop Art. Warhol man and Warhol artist are here perfectly represented by 57 masterpieces known throughout the world and who have made him one of the most important and revolutionary artists in the history of world art.

TICKET
full
10,00 euro
reduced
7,00 euro (valid for residents of the Municipality of Duino-Aurisina and university students with a document, groups of at least 10 people)
free
under 12, disabili and FVGCard holders.

WHERE
Via delle Botteghe